Earlier this month, former Dallas police officer Amber Guyer was sentenced to 10 years in prison for fatally shooting her unarmed neighbor she mistook him for a burglar.

After her sentencing on  Wednesday, October 2, the victim Botham Jean’s brother Brandt Jean embraced her in the courtroom after he announced he has forgiven her. 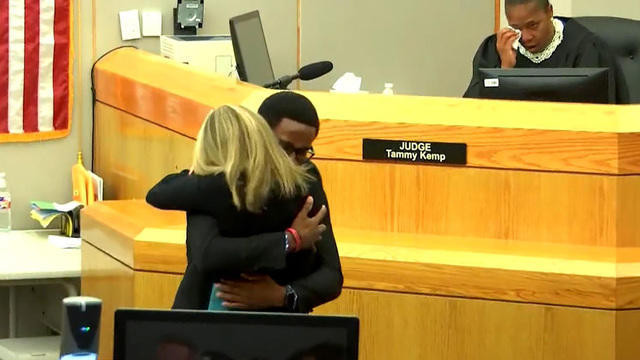 But Dallas judge Tammy Kemp who was in charge of the case was widely criticized by legal experts and the public after she embraced Guyger and gave her a Bible at the end of Guyger’s murder trial.

Explaining why she did it,  she said the former cop asked her for a hug and for help-seeking God’s forgiveness.

Kemp told The Associated Press that she believed her actions were appropriate since Guyger said she didn’t understand how to begin seeking God’s forgiveness for killing accountant Botham Jean, 26.

“She asked me if I thought that God could forgive her and I said, ‘Yes, God can forgive you and has,'” Kemp said. “If she wanted to start with the Bible, I didn’t want her to go back to the jail and to sink into doubt and self-pity and become bitter. Because she still has a lot of life ahead of her following her sentence and I would hope that she could live it purposefully.”

Kemp also went on to say she never acknowledged her Christian faith in court previously or provided a defendant with a Bible, but Guyger told her she didn’t have a Bible at the end of the trial and asked her for a hug twice.

“Following my own convictions, I could not refuse that woman a hug. I would not,” Kemp said defiantly.

Responding to the anger of Black people who questioned why she didn’t show the same empathy for Black defendants.

Kemp said: “I don’t understand the anger. And I guess I could say if you profess religious beliefs and you are going to follow them, I would hope that they not be situational and limited to one race only,”

Man Reportedly Commits Suicide After He Lost His Job And Girlfriend To His Friend
Soldiers shoot one of the armed robbers who trailed Bayelsa Deputy Governor's brother from a bank an...
Widow of murdered Winners Chapel pastor freed by kidnappers
Suspected UNIMAID students who allegedly pose as Boko Haram members to rob fellow students apprehend...